Noor is reminding Amaan of his childhood memories 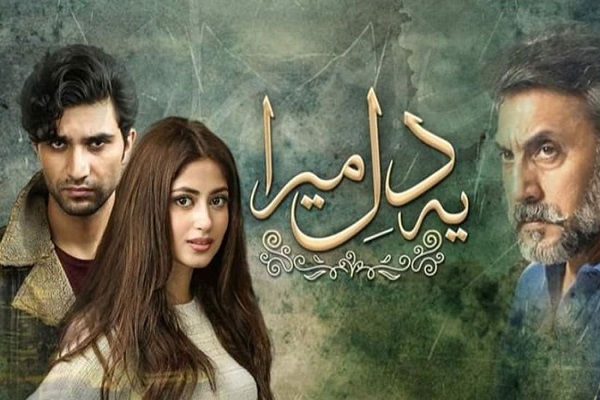 One of the most classy psychological thriller Ye Dil Mera running on HumTV is an interesting watch. Penned down by veteran writer Farhat Ishtiaq, the play has a gripping plot with an element of suspense in it. After the massive success of Yaqeen Ka Safar, the most favorite real-life couple Ahad Raza Mir and Sajal Aly is back to entertain us.

Noor is extremely worried that what her father is going to reply to Amaan. She wants to tell his father that she wants to marry Amaan but she cannot make herself do that. She writes that in a diary and Mir Farooq secretly reads that diary and then he comes to know that Noor loves Amaan too. So there he decides to accept his proposal, as his daughter’s wish is most important.

It is shown that Amaan coincidentally meets Mir Farooq’s second wife in the store and there she drops her card too which Amaan returns. Do Amaan meet her for a purpose or he knows that Mir Farooq is married to this lady or all this is a mere coincidence? Ghanzanfar’s wife and daughter are extremely mad on knowing about Noor and Amaan’s engagement they feel as if Amaan has cheated him when in real all their desires to create a relationship with him now can not get true. Ghanzanfar like a pure gentleman asks her family to attend this engagement like Noor’s true well wishers.

Well one thing seems so weird is that Noor always reminds Amaan about his childhood. He always get back into a childhood reverie when he sees Noor. It makes us wonder that what kind of history they share or what kind of connection they have. Why talking with Noor reminds him of his baby sister he used to play in his childhood? What happened to them? Why he gets lost in that old memories when he is talking with Noor?

Amaan and Noor ul ain gets engaged and in their engagement ceremony, Aina has sensed that Ghanzafar’s uncle’s daughter is not looking happy. He asks Amaan that has he given her any hopes so that is why she looks so hurt but he says its nothing like that. Moreover, he tells her that she looks very beautiful today and he feels like he will take her away from the world. Well engagement ceremony goes well and then Noor calls Amaan at the night time, the special time when Amaan used to lock himself up in a room and plays piano when he does not seem to like himself at that moment when he wants no one to disturb him, Noor dares to call hi and she is shocked to see Amaan’s response. He is yelling at her like a mad man.

tweet
Share on FacebookShare on TwitterShare on PinterestShare on Reddit
Rameeza NasimDecember 12, 2019
the authorRameeza Nasim
Rameeza Nasim, a Paralian, poet, passionate about poetry, drama and fiction. By giving drama critiques I feel like I am endorsing the writer's message to the audiences and also stressing on what Writers trying to say through his character portrayals and story, I love my job. Being a critic responsibility lies on my shoulders to point out the flaws and shortcomings of the play be it on writer's , performers or director's end . I did my Masters in English Literature and Linguistics and I earn my living through writing.
All posts byRameeza Nasim