Shamsher introduces Mahek to his family as his wife! 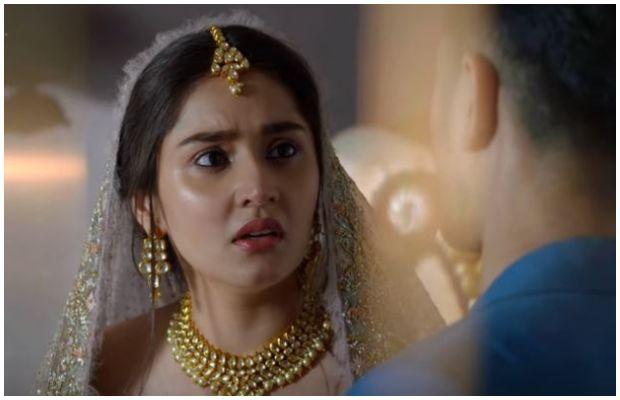 Ary Digital’s drama serial Kaisi Teri Khudgarzi is getting too many views. However, the story has many loopholes and there are a lot of loose ends which need to be addressed. Performances are quite good. In the previous episode, we have seen that Shamsher finds Mahek alive and he abducts her. In this episode, it is shown that Shamsher forcefully marries Mahek.

The first and foremost issue of this story is how Mahek survived that accident and fire. Did Sheroosaved Mahek’s life? This mystery should have been solved by now. They showed a flashback of Sheroo getting that how he ignited the fire on the car but it is not shown that he ever attempted to save Mahek then one wonders how Mahek survives that fire. Sheroo has anticipated that he will be in trouble so he hibernated somewhere.

Despite of all odds and resistance from Mahek’s side Shamsher forcefully performs his Nikkah with Mahek. Now Mahek is lawfully his wife. The first thing Shamsher does is that he takes Mahek to his house and introduces her to his family as his wife, giving a shocking surprise to everyone. Baba Sahab is furious to know that Mahek is alive. He is madly looking for Sheroo but he vanishes somewhere.

Shamsher is a kind of lover who will not touch Mahek without her consent. He will first make her fall for him. Well, this is not what we exactly want, we are not rooting for Shamsher and Mahek. There will be no chance for him as he doesn’t deserve Mahek. One thing is not making any sense if Shamsher really wants Mahek to fall for him then why he is not even trying to win her heart? When Mahek’s mother calls Shamsher he clearly refuses to let her talk with Mahek why?

Well, Baba Sahab and Dara’s wife will definitely not let Mahek live in peace. Nawab Dilawar is so delusional that he actually thinks that Mahek has enticed Shamsher when Mahek’s disgust for Shamsher is clearly written all over her face! One can clearly see that she is not happy with this marriage. Shamsher has not touched Mahek so far and their marriage is not consummated. Instead of wooing his newlywed wife, he is scaring her by yelling and shouting. The ending scene of the episode is where Baba Sahab tells Shamsher to leave his wife by giving her some money which Shamsher laughs hard on it. I don’t understand why Mahek nor her father has told Shamsher that his family attempted to murder her and still Mahek’s life is in danger however; her silence is not making any sense. A brainless entertainer sort of serial it is.

tweet
Share on FacebookShare on TwitterShare on PinterestShare on Reddit
Rameeza NasimAugust 11, 2022
the authorRameeza Nasim
Rameeza Nasim, a Paralian, passionate about poetry, drama and fiction. By giving drama critiques I feel like I am endorsing the writer's message to the audiences, I love my job. Being a critic responsibility lies on my shoulders to point out the flaws and shortcomings of the play be it on writer's , performers or director's end . I did my Masters in English Literature and Linguistics .
All posts byRameeza Nasim