And then she practically put out a fire too... 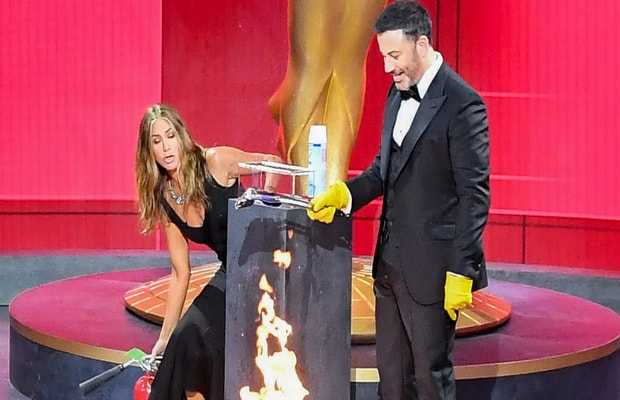 Corona times have brought about the strangest things to mankind and while social distancing, quarantine, and virtual had a different meaning in life, it’s all that the world revolves around now. One such different thing happened with the prestigious Emmy Awards which in contrast to other award shows decided to go ahead in the pandemic times – the difference, however, was its virtual nature but even that proved to be fruitful in a unique way.

“The Emmys themselves are not eligible to actually win an Emmy, but the Herculean task of pulling this off the way they have would deserve one,” said Deadline’s Pete Hammond of the Sunday’s event that was hosted by Jimmy Kimmel at an empty Staples Center in Los Angeles.

“Hello and welcome to the pand-Emmys!” Kimmel began the event in a hall filled with cutouts of the celebrities on chairs.

“No-one is in the audience, I’m up here all alone. Just like prom night,” he said as the producers managed to get laughs edited in from previous Emmy’s recordings.

“The big question I guess we should answer, is why would you have an awards show in the middle of a pandemic? ‘Why’ is a question I’ve been asked a lot this week. But you know what else seems frivolous and unnecessary? Doing it every other year,” Kimmel cracked another joke.

Another person to help make Emmys successful alongside Kimmel was the best actress nominee Jennifer Aniston. Aniston was not only among those few celebrities who visited Kimmel on stage in person but also treated the viewers with a half Friends reunion. 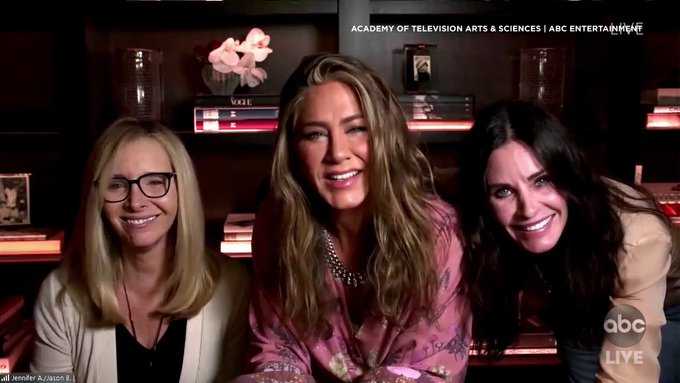 While on stage, Kimmel set a trash bin to fire to ‘kill all germs’ on a nominee envelope lathered with sanitizer and Jennifer was at his rescue as the flames went higher than anticipated. 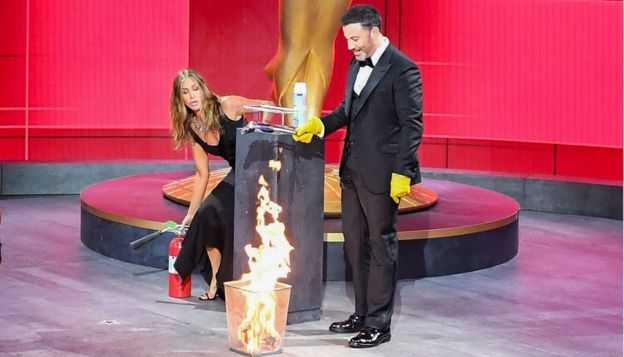 “Put out the fire,” the producers exclaimed from backstage and the Friends star successfully managed to do so with a fire extinguisher.

Not only that the actress put out the fire, she also lit up Emmy Awards with a special appearance alongside her buddies from Friends Courtney Cox and Lisa Kudrow.

After her on-stage appearance, Jennifer once again came back through a virtual segment from her apartment. While she chatted with Kimmel as the best actress nominee, Courtney appeared from behind.

“Oh! Courteney’s there?” Kimmel asked,
“Of course I’m here, we live together,” answered Courtney referring to her roommate status with Jennifer in Friends where the two starred as Monica and Rachel.

“Yeah, we’ve been roommates since 1994 Jimmy, hello?” Jennifer added with reference to Friends year of the premier.

Moving on Lisa who played Phoebe also barged in, Lisa Kudrow, you live there too?!” asked Kimmel in a state of disbelief. “Uhh… yeah? Where else would I live?” the star replied.